Etem ÇALIŞKAN and the Age of Writing 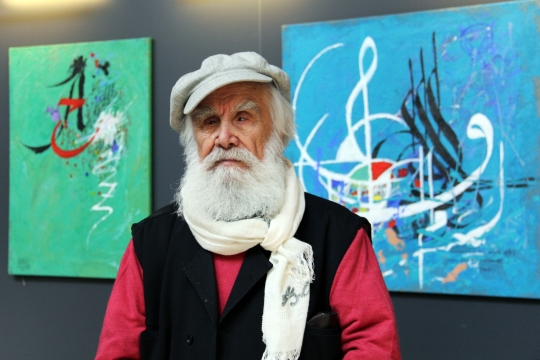 On Scarfs Will I Write

Etem Çalışkan is an infatuated writer blazing with the love of writing. In 2005 for an exhibition in İstanbul he gathers up point lace scarfs made by Yoruk and Turkmen girls, women and brides coming from the Taurus Mountains and he writes Karacaoglan poems on those scarfs. And he gives this name to the exhibition: ‘On Scarfs Will I Write’.

He claims his age to be the same with cuneiform age and he adds the date 6020 next to each signature he puts on each work of that year. When he is asked why, he says ‘Because writing came up with people.’ and continues explaining with a great excitement:

‘It is said that Sumerians invented writing. Yet writing already existed with humans. Troglodytes who lived forty thousand years ago in a way wrote spoken language out by illustrating the cave walls. Because writing means drawing. It is a written expression of sign language. What Sumerians did was to scratch cuneiform on clay tablets. Then with hieroglyphics in Egypt came up the first examples of calligraphy.

Deaf mute (ahraz) people are the ones who first used writing. Rising generation isn’t acquainted with this word. Ahraz is an ancient Anatolian word meaning deaf mute. They transform writing into hand and finger signs shaping the spoken language. As a result, writing consists of hand and finger motions and these motions develop until they are transferred to paper. Nowadays on television and in important meetings writings take place for people with impaired hearing by means of hand and finger motions.

Writing is the greatest art. It turns into longing, sorrow and love. It turns into the love of Yunus, Mevlana, Dadaoglu, Karacaoglan, Pir Sultan. It serves as a road leading to lover. It is the mother of all kinds of art. Even animals use this art. A cat’s glance and even a dog’s tail movements are writings to those who want to read.

Calligraphy on the other hand is an art of writing by giving fine shapes to letters. It is a fine writing art, a Husnuhat. It is to dress letters with more aesthetical clothes. If writing were not invented, Calligraphy, husnuhat and mankind would not have existed. If writing didn’t exist, this exhibition would not have taken place here today.

So it means that writing existed before Sumerians as well but the writing they scratched on clay tablets is six thousand years old. Therefore the age of writing is the age of mankind.

Let him be told by me this time

This is how Selahattin Yalçın, a friend of Etem Çalışkan for 35 years, a graphic designer and a researcher writer, tells us about him. 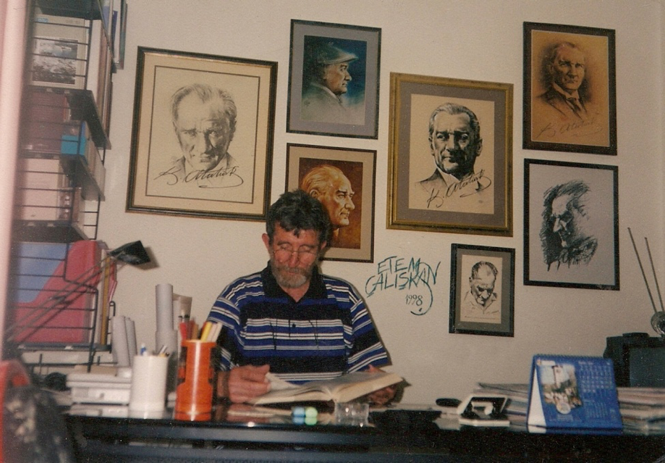 ‘My relation with art could not go further than graphic design. Literature lives on top and music lives on ground floor of my house. I couldn’t implement a close friendship with them yet, and still we can be regarded as neighbours. The three of us get on well with each other.

It was in Ankara in 1985 when I had an advertising agency. Etem Çalışkan who saw one of my graphic edits, visiting Ankara during that time, wanted to meet me. I rushed over to see him and I never left him afterwards. In a month he became my brother Ethem. It isn’t so likely to come across this ‘brother’ word in spelling dictionaries but it has been an essence of spoken language. You don’t see the word ‘aga’ anymore either. However Etem Çalışkan once was ‘Etem Aga’ of Babıali.

During the years of 1987 – 1988, I published Peron Magazine for Varan Tourism, the most distinguished bus agency of the time, and opened a branch for my agency in İstanbul. Etem Çalışkan was the executive editor.

Approaching culture, art, literature, cinema, theatre, and photography and tourism themes studiously, Peron Magazine was left no other option than to cease to exist due to a hundred percent increase in paper prices that came within a night in 1988.

Yet the contribution of Etem Çalışkan to the Magazine was never forgotten.

The reason why I’m telling these is to introduce such a value as Etem Çalışkan closely through my perspective instead of accustomed biographies. Because even if you wish to get to know this incredibly humble person through his words, he only utters these words:

‘I was born in Gocuk village bound to Gulek district in Tarsus on the day of liberation feast in Cukurova on January 5, 1928. My mother Cennet and father Halil! I am the eldest of three brothers and two sisters. After finishing primary school in our village, I graduated from Mersin High School. I studied in the faculty of fine arts in Istanbul. I worked as a painter, graphic designer and department chief in various newspapers. I held exhibitions locating from Malatya until Istanbul. I am married to Güngör Çalışkan. I have three children named Raci, Adnan and Dilek. I retired from Hurriyet Newspaper deliberately on 5thof January for it coincides with my birth date.’

That is all! He doesn’t tell more about himself. If you insist, with his affectionate smile he replies: ‘Oh dear’ ‘I am as much as people can know about me.’

Yet too has a life. He is a human as well. Therefore I want to get to know him better. Information on his art history can be found anywhere. But he, first of all, is human Etem Çalışkan. He eats, drinks, sleeps and travels like we do. No one knows if he is hungry or full. He loves strolling around the wilderness and highlands. He loves kneeling down on the soil and eating figs, grapes, melons, watermelons that he picks from their branches. He says ‘I don’t have a penny to my name. This is how I am.’

Not that he cares about money but he draws it with master lines. He presses memorial money for the mint and memorial stamps for PTT. Then looking up on them he says: ‘I have a penny to my name. This is how I am.’ First he is a human, then a journalist. The highest salary he earned throughout his life is his monthly wage as a journalist.

He is a great Calligraphy artist. He saved this art from Arabic letters, translating them to Turkish. Among his hundreds of work, he decorated the walls of Anıtkabir with his writings. He wrote Koran, Yunus Emre’s Divan and Nutuk by hand. When he finished writing Koran he cried his heart out. That I have some pages of Nutuk written on my desk is something that will be an honour for me all my life.

The Nutuk project was on his mind and in his heart for many years. When he made up his mind he was sixty nine. I hesitantly asked: ‘Etem brother, this project will be both difficult and time consuming for you. Don’t you think it is a bit late for it?’I still remember my eyes filling with tears with his response: ‘So be it. Even if I can’t make it, I will have died for it.’ And he made it.

He is the painter who lived Ataturk, not drew him. In his paintings, Ataturk’s eyes sparkle.  His lip curves are different and his posture is noble and meaningful. For some paintings he prefers vibrant colours and for some shaded. Because Etem Çalışkan transfers the circumstances we live in to his paintings. I have no doubt that if he draws a new Ataturk portrait it will not display an Ataturk who gives us power with his firm stand, looking at our future with faith. It will be an Ataturk who is mad and resentful that we see.

It is because Etem Çalışkan is also a great thinker. You find secret thought sparkles within his paintings and Calligraphy works.  He especially adds graphics along with painting to his Calligraphy. He expresses tranquillity, chaos and love. He thinks and he makes us think.

His well-known pencil drawing portrait of Ataturk he made in 1969 has been used hundred millions of times throughout the world. He didn’t earn a penny from it apart from his monthly wage from Milliyet Newspaper. I warned him many times so that he would make money from all these efforts and works. He refused. He said: ‘He is Ataturk. He cannot be sold.’

I still went to the head office of Republican People’s Party without telling him a word to inform them that Etem Çalışkan lives in İstanbul and that they have to offer him royalty for his work. They welcomed me with kindness and invited Etem brother to Ankara and paid him his royalty. He was upset with me at first but that was the only money he earned for that painting.

Etem brother is now 93 years old. He draws, writes and travels. He travels Anatolia through exhibitions. If he comes across a desolate place, he caresses fig and plum branches. He teaches his young students. He doesn’t like being called ‘Ethem’ but his bust in Tarsus is accidentally given the name ‘Ethem Çalışkan. At least the name of the reading hall opened on 29 October 2010 by Tarsus Municipality is correct. ‘Etem Çalışkan Reading Hall’.

He changed the name March, the month he lost his dear friend Aşık Veysel Satıroğlu , giving it the name ‘Winter spring’. And if there’s still snow on the ground, that year the name becomes ‘Snow spring’.

It takes a lot of effort and many loops for the sun to assemble every Etem Çalışkan work. Even he can’t put together all he wrote, drew and thought.

Etem brother is 19 years older than me. Same with the letter numbers of Mustafa Kemal ATATÜRK! We both are big fans of Atatürk but he is mad about him.

He hasn’t been visiting often in the last years but for 35 years Etem Çalışkan’s address in Ankara has been my address and his house has been my house. That’s why I wanted to be the one to tell you about him.

Let us all remember Etem Çalışkan with love and stay with love for he says: ‘Lovecomes first. Nothing happens without love.’Let our love for Atatürk never be missing in our hearts and minds.