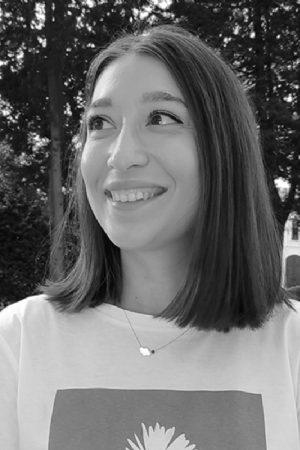 She was born in İstanbul in 1991. She was gratuated from Mimar Sinan Fine Arts University, Faculty of Fine Arts, Department of Traditional Turkish Arts, Calligraphy Art Department in 2014. She started to study for her master’s degree at Institute of Fine Art, Traditional Turkish Arts Department in the same university in 2014.  She was gratuated with the thesis on “The inscriptions produced by tile in mosques in İstanbul builded by Mimar Sinan in the 16.century” by thesis advisor Ali Rıza Özcan in 2017. During undergraduate education, she started her calligraphy education with İlhami Turan and has continued with Erhan Olcay at Küçükçekmece Traditional Arts Academy. After two years basic calligraphy education, she received advanced level certificate of calligraphy from The Calligraphy and Lettering Arts Society (CLAS) which is an international callligraphy society. She attended calligraphy classes of worldwide known calligraphers such as Denis Brown and Yves Leterme within the scope of Kaligrafist which in an international writing culture event.

She participated to various group exhibitions with her works on Islamic and Latin Calligraphy Art. She has continued to her works on art and design, in art studio named Meftun Sanat in Istanbul Handicrafts Center.