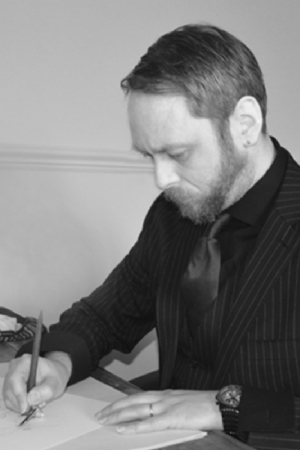 I'm James Farrell, my nickname Fazz comes from school where Fazz was short for Farrell and it whilst at school at around age 8 or 9 that I discovered and began to teach myself calligraphy. I studied Mechanical Engineering and passed with distinction in 2002. After studying Mechanical Engineering, I began teaching myself Spencerian and Round Hand after coming across the IAMPETH website around 7 years ago. At first it was a real challenge to learn how to use the pointed pen and to familiarize myself with the movements and pen, ink and paper combinations. I began putting all of my learned skills in Engineering, love of music and physics and science in general into coming up with new and contemporary forms of pointed pen after first learning the Standard Models of Spencerian, Duntonian and all forms of Round Hand. I have now developed a new modern style inspired by nature and the cosmos, based on the historical Spencerian and Round Hand scripts into an (hopefully) exciting new pointed pen “look”.  I think it is important to try to push the boundaries of the art that you are involved in, to try new ways of doing things and to look at lettering in a slightly different way.

I produce works of art around the subjects that interest me the most, largely being science, the natural world, music and so on, all of my works are for sale in their original form. I do accept commissions but I prefer, for fun really, just to play music, write whatever comes to mind and play with colours.

My work absorbs inspiration from the following sources:

I’m an international calligrapher teacher and I travel around the world to teach the traditional art of calligraphy.

In 2014 I started teaching calligraphy, first in Italy and then around the world.